Sunil makes this pronouncement, then hangs up the phone.

Our caretaker is a man of few words.

This message about the bees is not totally surprising, as we have noticed a lot of honeybee activity in the last week. We’ve found anywhere from 1 to 3 inside our house each night as the sun sets. Having bees up at the 13th floor seems strange. It’s not totally out of left field, though, as our neighbor, delightful fourth grader Shambu, mentioned in passing that Sunil had to remove a large hive from the floor above ours last year. We close the doors and windows and seem to have escaped a hive that may or may not be seeking new digs. For this day.

I am a lifelong lover of all things insect, and while I’ll take beetles over ants any day, I do love a good ant. Much of this is to do with my deep affection for the myrmecologist E.O. Wilson. I even have a copy of his treatise The Ants, co written with Bert Hölldobler. It won the Pulitzer for non fiction in 1991. Have I read it cover to cover… no. At 700+ pages and weighing in at over seven pounds, I have not. I only own it because in the late 1990s a guy I was dating said he wanted to buy me “something expensive” and it was the only thing I could think of. Ugh. Glad that didn’t work out. Back to the point. I hope this demonstrates that I am okay with ants, generally speaking. But the ants in India have been a bit much. There are many species. Allow me to describe them to you, not in scientific terms, and in no way informed by Wilson and Hölldobler’s The Ants.

There are large red ants which reside all around the playground– they crawl along the walls. They also create bundles of leaves in the trees above the playground, which leads us to believe they are weaver ants. It can be disconcerting to have them drop onto you as you stand under the trees. At *least* they are large and you can bat them off pretty quickly. It’s something.

There are the small red ants that I found on the tea kettle last week. I didn’t realize they’d been hanging out there until it was much too late. This is a plug-in-the-wall kettle, and it was well on its way to a hard boil before I noticed the macabre rave happening on the lid– two dozen small red ants frenetically moving faster and faster on a burning hot dance floor. It wasn’t pleasant, but was kind of fascinating to watch. After a nice cup of tea I calmed right down.

There are the pale brown small (thankfully) non stinging ants that reside in my office. They blend in with the brown and gray tablecloth that covers my desk/table. So much so that it might take a moment to realize the whole surface is moving. They are opportunists who will flood the room if even a crumb is left behind. Forget having an office stash of snacks. If an unnamed husband accidentally leaves his lunch container in said office and only realizes after returning home, then one must encourage the unnamed husband to make a hurried call to a colleague to remove it from the office immediately. Or so I imagine.

These may be the same ants that crawled in and out of my computer with regularity the first month I was here. There is a thing, apparently, with ants being attracted to electronics. If you don’t live in a region with the Rasberry crazy ant count yourself lucky. But don’t get too snooty about it, thanks to climate change you will meet them one day.  When they come in contact with electronics and complete the circuit, they are fried– but they leave a pheromone signal that attracts other ants, furthering the cycle. Crazy ants are not here, but the phenomenon of ants sending a signal from my computer to other ants seemed to be happening for about a month. I wiped the machine down daily for a while and it seems to have stopped the cycle. Big sigh of relief.

Some of the worst are very small black ants that we encounter often. About the size of a typical flea, they can be found in your house or out in the wilds. My first interaction came when I was trying to discuss the Indian school system with a parent at the playground. About halfway through our conversation I noticed a stinging on my neck, a few minutes later, one on my chest, then on my torso, then my side. I tried to wrap up the conversation to get back home. I assume I had brushed up against a bush or they had fallen from a tree. The initial sting is painful, but it’s the second day that it really hurts– that’s when the quarter-sized swelling produces a terribly intense itching that lasts for days.

Another ant can also be found in our home– it’s pale like the office ant but engages in different behavior. We’ve found these ants on two occasions. We tend to hang on to the boxes for electronic equipment– not sure why. Maybe we’re still working under the delusion that things aren’t designed for the dump (don’t get me started on planned obsolescence). Twice, a family member has gone to pick up one of these boxes, only to find (after lifting it from the shelf) that something small and pale was … dripping isn’t the right word, but it’s almost the right word… let’s go with… dripping from the box. After a quick run to the porch and a swift opening of the box, we found the ants had overtaken the space to create a large nest. The ant eggs were the pale drips cascading from the lifted box. You know, like one might experience in a HORROR MOVIE. Twice was more than enough to encourage us to clear all of the electronics boxes from the apartment.

The most common house ant is a bit different from all of these. It’s darker brown than the office ant, but not black or red. It does not sting. These ants tend to have a trail marching toward and from the compost bin and trashcan at all times. For these we wipe the trail down each day, and they begin again. They at least keep to the kitchen area. If someone forgets to put the lid on the compost it turns into a real party up in there, but for the most part we hold them at bay.

This is just the tip of the Indian ant iceberg. A listing of common ants doesn’t even mention most of these pedestrian house varieties. We are learning a lot about this branch of the insect family– though you won’t catch me saying I’m eager to meet them all. 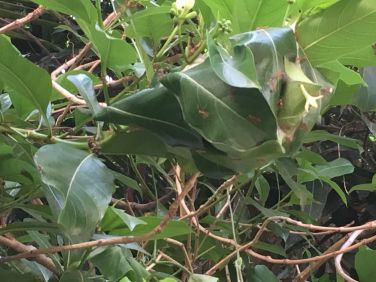 Weaver ants from the playground

2 thoughts on ““Close all the doors and windows, the bees are hunting””